The Autumn inspection on 11th. October was a quiet affair with just me and Coral Edgumbe (social-distanced by a 10ft. Ladder – she was at the front and I brought up the rear!) looking at all the bat boxes, while Simon and Rosie Richardson went off on their own to do the Dormouse boxes.

We replaced a couple of the wooden boxes, and found just one Noctule and one Brown Long-eared bats in the others. In the six hanging boxes there were 6, 3, and 2 Soprano Pips. And one Soprano Pip in one of the chainsaw slabs.

But in the beginning of November I had an email from Gemma Crow, the CWT Reserves Warden letting me know that she had received a message to say that one of my boxes had fallen down. When I went to investigate I found that the last box I had hung up in the last tree on the top ride had come down, fairly soon after I had hung it up in the October visit. I couldn’t tell whether it was squirrel damage or just some rotten courlene rope I had used. Anyway, I took the chance to separate this box, AWD, from the nearby one which has had the breeding colonies in. So I “lynched” it over a bough on another Oak tree about 50m further east along that top ride. While I was at it, I looked at the other boxes from the ground. The only other bats were 2 unidentified in one of the chain-saw slabs and one Soprano Pip in another. None in the hanging boxes.

So bats are still happy to hang around in these insulated boxes during the depths of winter. But, alarmingly, one of the chain-saw slabs had a Woodpecker shaped hole drilled in it just about where a bat would be inside! So any replacements for these are going to need some exterior protection from birds. 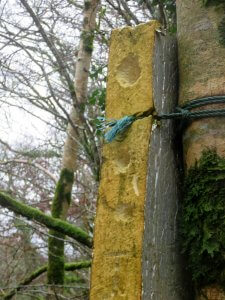 I’ve several times had some of these insulated boxes hanging in my barn at home, where I often get a Long-eared night roosting.  But only once did I ever see a day roosting bat in any of them. But it seemed pointless keeping them at home, so back in October I hung one in some woods on the Coldrenick Estate, just north of the A38 about midway between Trerulefoot and Liskeard. It will be interesting to see what this one attracts.